Bayern Munich striker Robert Lewandowski was crowned UEFA Men’s Player of the Year for 2019-20 on the back of a magnificent campaign in which he won the Champions League, Bundesliga and DFB Pokal. In a year full of unprecedented events, this was a predictable bit of news in which we can all take comfort.

Having already been named Forward of the Year at Thursday’s draw for the 2020-21 Champions League group stage in Geneva, Lewandowski won the overall award by an absolute landslide.

Never stop dreaming🙏 Thank you for this prestigious awards. Tonight is a proud moment, but the journey continues💪 @FCBayern pic.twitter.com/jpwGlulrc9

The Bundesliga achieved an impressive double as Pernille Harder won the Women’s Player of the Year award for her exploits at Wolfsburg last season, before her recent move to Chelsea. The Denmark international became the first women’s player to win the award twice since its inception in 2013.

Germany’s top division is on ESPN+. Can Bayern Munich stay on top or will the likes of Borussia Dortmund and RB Leipzig take over?
ESPN+: Live games and replays (U.S. only)
Bundesliga home | Schedule | Standings

The UEFA Player of the Year jury comprised 80 coaches, all of whom participated in the 2019-20 Champions League and Europa League group stage, along with 55 journalists all selected from each of UEFA’s member nations. Jury members then chose their top three players of 2019-20, first place receiving five points, second place receiving three points and third receiving one point.

Robert Lewandowski had more points than the rest of the top 10 combined 👀 pic.twitter.com/852YSIJRsW

Elsewhere, Bayern’s domination was confirmed when coach Hansi Flick was named Coach of the Year, while Neuer and Kimmich picked up positional accolades as Goalkeeper and Defender of the Year.

Putting the gloss on Bayern’s big night, Muller was also on hand to congratulate his teammates and stage a reconstruction of the award ceremony with the help of some equine friends.

It’s frankly remarkable that Lewandowski still appears to be going from strength to strength with 2019-20, the 17th season of his professional career, proving to be his most prolific. For one thing, he managed to hit the 30-goal mark last season before Christmas.

The 32-year-old went on to equal a record long held by Bayern and Germany great Gerd Muller by scoring 55 goals in 46 appearances in a single season for the club — the fifth season in a row that he has notched more than 40 goals in all competitions.

Lewandowski also scored in every round en route to the Champions League final, finishing top scorer in the competition with 15 goals (and six assists) — the first player outside the Messi-Ronaldo duopoly to do so since Kaka back in 2006-07.

In fact, he finished as top goal scorer in every single competition he participated in, having scored 34 goals in 31 Bundesliga appearances as Bayern cantered to their eighth straight championship win and a further six goals in five outings in the DFB Pokal — that’s an average of a goal every 74 minutes. 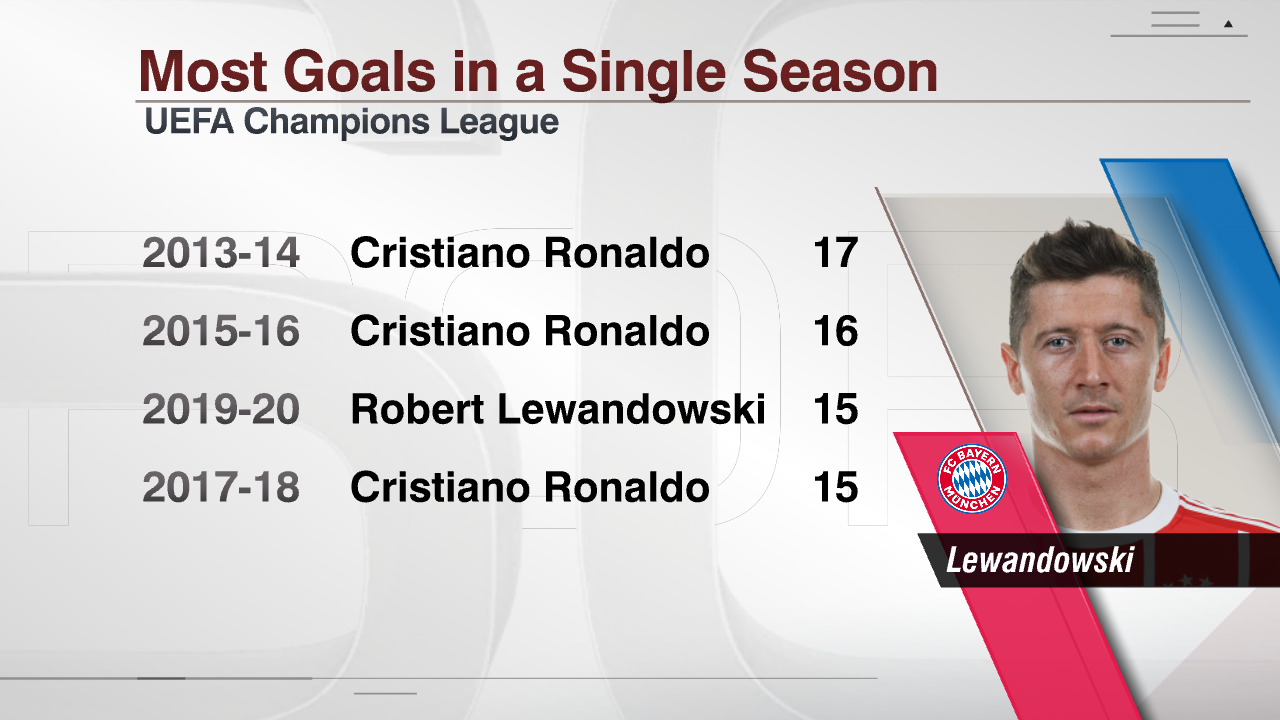 The one possible blot on Lewandowski’s copybook this year is his questionable social media output. At the draw in Geneva, he was grilled on his enthusiastic TikTok routines that he took to posting during lockdown.

“I did it for everyone at a very difficult time,” he replied. “I don’t think that I am an amazing dancer, but I like to dance!”

Asked if he had any new moves to demonstrate to a live audience, Lewandowski politely declined.

“It’s too difficult to move in this suit,” he joked. “But maybe next time there will be a little bit of Michael Jackson.”

When it comes to Lewandowski’s superhuman on-pitch efforts in 2019-20, the only sad blight is the fact the Bayern ace was robbed of what was likely to be his best shot at winning the Ballon d’Or.

He was well placed to take the top prize, only for the award to be cancelled entirely in July due to the coronavirus pandemic. However, despite the majority of European leagues managing to restart and conclude their seasons in full, the decision to skip this year’s Ballon d’Or award has been upheld.

When asked by Polish newspaper Sportowe Fakty in August who he would give the Ballon d’Or to if he could, Lewandowski did not downplay his own accomplishments.

“I’d give it myself,” he replied. “We’ve won everything there was to win and I was top scorer in every competition. Any other player in my position would receive it.”

Hard to argue with that.

The Ballon d’Or honour roll will have a blank space where this year’s winner should have been, but Lewandowski will be remembered as the player who ruled 2020.